Do You Ever Find Yourself Covering Up Ugly and Dealing With Entitled People? 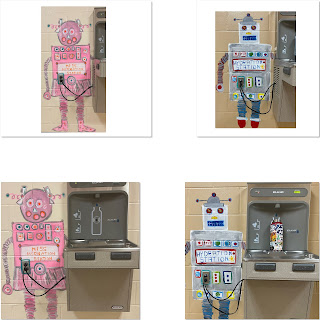 I asked, “Do you ever find yourself covering up something ugly?”  I do.  The robots are above are one example of trying to make something more pleasing to the students’ eyes.  Let me explain how this came about.
Like many schools, Covid in 2020 was a game changer.  One thing that was changed out in our school was the water fountain.  We changed all the water fountains out with water bottle filling stations.  I must say, I use them a tons and save a lot of money bringing water and drinks to school.
So, what was ugly?  Well, we took out the old water fountain and no one ever bothered to paint the spot behind where the old fountain had been.  It was right by my door and for 2 years I waited for the paint touch up.  One day it hit me, make it a robot and call it “Hydration Station”.  That is exactly what I did.  I like it much better.  I hope everyone else does, too!
L👀K! 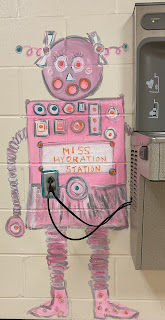 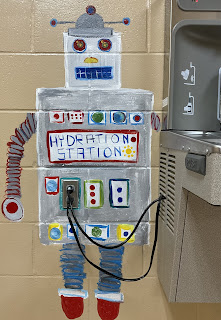 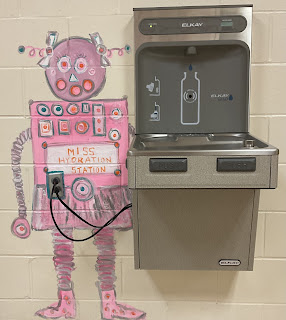 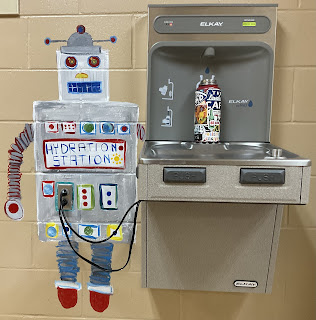 And I also asked, "Do you ever find yourself dealing with entitled people?  Remember those old school water fountains we all drank out of with no worries about any germs?  These water fountains made me have a thought or two about bullies that turned into entitled big people. 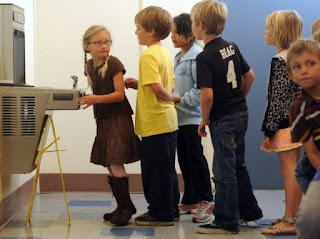 The old water fountains that we used in the 1970s, man, they caused all sorts of problems.  Most of us were there because we came in from recess and were so hot!  As fast as we could, we headed straight to the water fountain.  Oh the line could be long!  There were the bullies (Yes, we had bullies in 1970.  Remember, there is nothing new under the sun) that would break in line.  There were friends that would “give their friends cuts” and that could throw you back a spot or two.  There was pushing in line that the teacher would come unglued about and we would all be punished.  Also, there was the occasional water fountain monitor for those kids that considered themselves special and would drink for five minutes.  These special folks were known as “water hogs” and now continue to do similar things as adults.
And, this just makes me want to share some real life happenings with the water hogs that are now all grown up!  These people are now parents and continue to think that they are entitled to do these types of things using their children.  Examples:  Stopping the entire carline to let little Jill in the car so she won’t have to walk to the orange cone like everyone else.  Buying their daughter an ice cream when she had physically hit a boy at school.  Once, I had leftover ride tickets from the state fair for maybe 2 rides.  I put all the names in a hat, and I drew out a name.  Little Jack didn’t win the tickets so his parents kept him out of school the next day and took him to the fair!
That’s all I got folks!  Try to make something better everyday.  Do right with whatever it is that you do.  It is a much easier and less drama in your life, for sure!
❤, 1965
Posted by 2 Soul Sisters at 12:00 AM