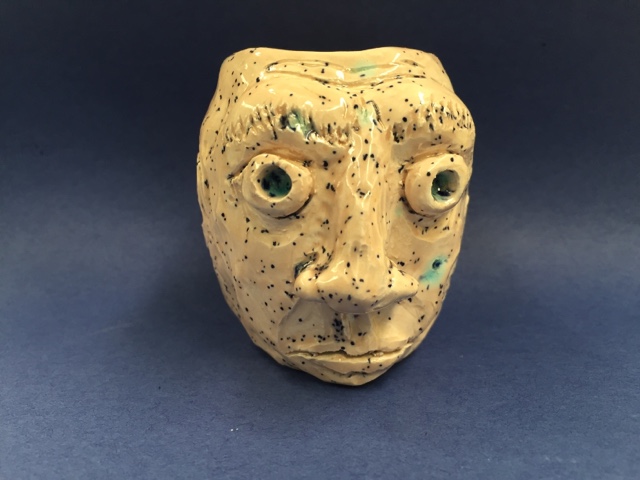 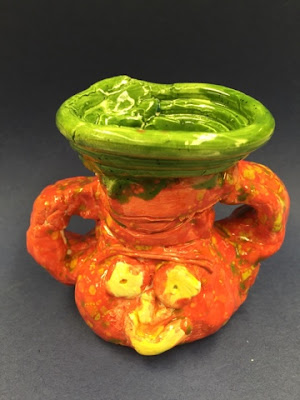 History of Face Jug is in the link below
http://www.pbs.org/opb/historydetectives/educators/lessonplan/face-jug/ 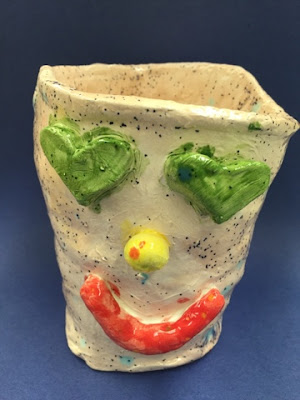 The use of pottery jugs can be traced back beyond the Roman Empire. In a region like ours, where histories are often oral, tracing the origins of our traditions is tricky. Face jugs are one of the traditions that are an amalgam of many cultural influences. Amongst that rich history is the port of Charleston; the African tradition of using jug pots as headstones was brought to our culture through this port. Highly prized red glaze recipes from China also made their way to our region from the Charleston port. And even from the pubs of England came a long history and influence through their ever-charming Toby mugs.

Face jugs combine the utilitarian influences of early regional pottery with the unique imagination of individual pottery makers. In the mountains of Georgia, and the Catawba Valley, North Carolina, ugly faces, snakes and devils were added to Market Jugs beginning in the late 1800's. These embellished pots were used to buy & store liquor; the ominous features would scare children so they would not be tempted to try the contents. 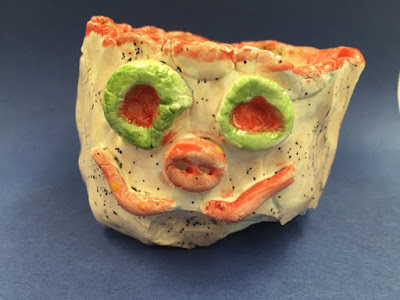 I was afraid of what would come up when I Googled "ugly jugs", but with safe search, I found just what I was looking for. Jugs with faces date back to antiquity, but became an American folk art tradition. The time and place this tradition began depends on your source, and the jugs had several purported purposes which could all be valid.

More ugly faces, after the jump.

Jerry Brown heard that slaves made ugly jugs to distinguish the different liquids inside. Jugs with faces were for the ones you couldn't drink, such as kerosene.
Potter Jim McDowell heard the history of the jugs handed down through generations. According to family lore, ugly jugs were used by slaves as grave markers, made ugly to scare the devil away. McDowell's face jugs include messages, like this one that says "Don't judge the color of my skin; judge me by the content of my character."


According to Pawprint Pottery of Barnwell, South Carolina, ugly jugs were used to keep kids out of the moonshine. They were made as scary as possible for this purpose! These jugs with recycled porcelain teeth would do the trick.

Potters provided jugs for bootleggers during the 1920s, but made them with ugly faces to show their support for Prohibition.
The Smithsonian Institution doesn't know what purpose the ugly jugs served, but places their origin in South Carolina in the mid 1800s.

Most sources I found placed the face jug tradition as beginning in Edgefield, South Carolina, although they are also associated with Georgia and other southern states. Georgia artist Brian Wilson made these whistling face jugs.
American Folk Art and Framing places the origin of face jugs in the piedmont region of North Carolina and Georgia. They feature works by many different artists, including this cross-eyed face jug.