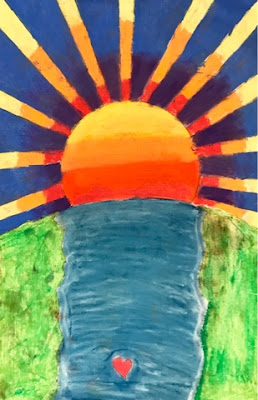 I work in such a cool place. Did you know that? Maclay values the Arts on campus. This is evident by when you walk down the hallways and see really super artsy items hanging up on the bulletin boards or go into the classrooms to see pieces of art like these sunshines in the particular blog post. I tend to be on the 4th and 5th grade hallways a good bit as that is my route on campus to different destinations. 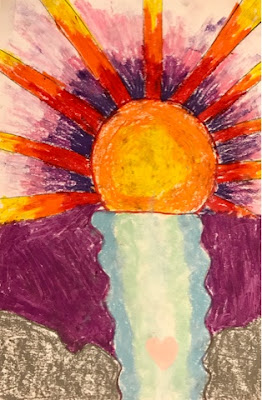 Mary Byrd and Peter Max's Psychedelic Sunshines make my heart smile when I see units that tie together Arts Integration like this lesson. Lots of Elements of Art being taught in this lesson. The teachers on the hallway incorporated the theme for our Celebration of the Arts into their classroom lessons. These are some of the results. Pretty cool, right? 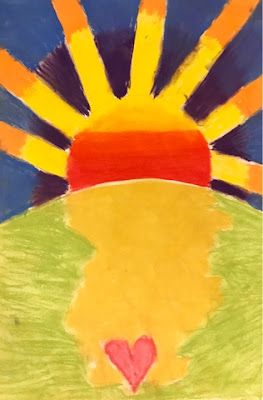 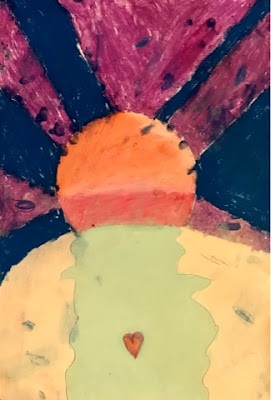 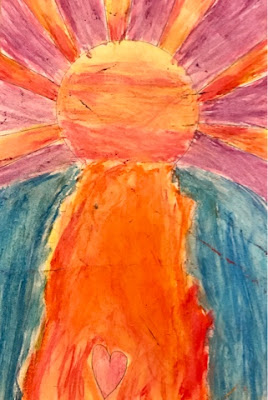 https://www.parkwestgallery.com/artist/peter-max Here you will learn all about Max's life:
Peter Max’s story begins in Germany where he was born in 1937. He and his family fled the Nazis in 1938 and moved to Shanghai, China, where they lived for the next ten years. Max was incredibly artistic from the moment he was born, enamored by color and constantly searching for ways to draw on everything (to the detriment of his mother). For Peter, color was paired with sound – an intense synesthesia. The ripple of crayons on a steamer trunk was the first memorable experience for the artist where he truly realized his love for sound and color. Today, there are few works by Max created in silence.

Early in his life, Max fell in love with three things: comic books, movies, and jazz – all uniquely American. In China, Max’s lessons were taught in English, so when he saw his first American movie after school at the cinema and picked up his first comic book, he was able to understand them. Max’s early love for comic books hugely affected his style. The foreshortening of lines, bold colors, and the heavy black outline of the characters stayed with him.

He and his family traveled through Tibet, southern Africa, India, Italy, and Israel, exposing the young Peter to more cultures and languages than many see in a lifetime. While in Tibet, Max was struck by the monks in meditation. They were carrying their walking sticks and chanting by the waterfall at sunset—an image that Max wouldn’t forget and one that often appears in his art.. Before he left China, the pillars of Max’s style had been constructed. His love for color, spirituality, graphic lines, and music formed the foundation on which he would create his future artwork.

In 1948, they moved again, this time to Haifa, Israel. Peter learned fluent Hebrew and began delving more seriously into his art. Becoming a distraction from his classes, his parents tried to structure his creativity by enrolling him in art lessons with a Viennese Expressionist after school. Professor Hünik enlightened Peter, changing the way he thought about color. He became the professor’s protégé for the next two years and began defining himself as a colorist. When he needed more assistance with his drafting, he turned to comic books, following their foreshortened lines and vivid style.

There was another book that heavily influenced his style, though, and it was less than conventional. One summer, Max began reading the encyclopedia, beginning with the letter “A”. He got no further than astronomy. He was enamored by the subject, so much that he begged his parents to study academically. They found a way for him to audit classes at Technion, a scientific university in Haifa, where he began his thirst for space. Later in life, this deep interest in the cosmos would turn into a spiritual quest as much as it was scientific.

Before moving to America, the Max family traveled to Paris for nine months in 1953 where Peter spent time studying at the Louvre. While Max had demonstrated his interest in sweeping color and lines, almost nearing abstraction, his interest at the Louvre was actually in works by the 19th century artist, Adolphe-William Bouguereau. His nearly photo-realistic paintings were inspirational to Max, who wanted to focus more on his draftsmanship. Bouguereau was his ideal mentor to allow him to further develop his technique, but Max soon learned that while he was capable of painting in such a naturalistic style, it took much more time and patience.

His family eventually settled in Brooklyn, where Max graduated high school then studied under the realist Frank J. Reilly at the Art Students League. He spent nearly all his time at the Art Students League, taking every class possible for the next five years. He learned drafting and anatomy from Reilly, finely honing the technique he once admired of Bouguereau. Max discovered, however, that by painting so photo-realistically, he was closing off his imagination, limiting his options. Pushing toward abstraction, color fielding, and many of the styles in vogue, Max eventually found a place as a “Neo-Fauvist” and a “Neo-Expressionist,” allowing his creative spirit to blossom.

In 1961, fresh out of school, Max started a graphic design studio with friends, finding almost overnight success in the design industry. Throughout the sixties, Max developed his signature “psychedelic” style (his ongoing fusion of eastern yogi philosophy, astronomy, comic books, studies in color, and music) expressed through posters, advertising, and his graphic works. The look he achieved was sought-after by companies across the country and agencies, magazines, and national publications placed Max at the center of the youth movement. The story behind his poster for the Central Park “Be In” on Easter of 1967 was even adapted for the Academy Award-winning director Milos Forman’s film, “Hair.” Max was at the center of a cultural revolution, magnified by his unique graphic style. He was featured on The Tonight Show and on the cover of LIFE Magazine. His posters were on the walls of every college dorm-room, and he had become an iconic artist and designer.

In 1968, while working on a film in Paris, Max met Swami Satchidananda. That moment was life-changing for the artist. Introducing him to yoga and a deeper understanding of Eastern spirituality, Max invited the swami to stay with him in the United States, helping him establish the Integral Yoga Institute, spreading the teachings of yoga throughout America’s youth. With more than 70 branches in each state today, plus 21 other nations, Max helped introduce yoga to a greater portion of the world, enlightening young and creative minds.

For most of the 1970s, Max shut down his graphic workshop. Intensely focused on his getting back to the paint, he took himself off the radar for almost 18 years, only spending time painting. Park West Gallery has enjoyed a relationship with Peter Max since the 1970s and is the artist’s largest and longest-running dealer in the world. Throughout the ‘70s, even while retreating somewhat from the spotlight, Max stayed busy, the subject of an exhibition at the De Young Museum in San Francisco called “The World of Peter Max.” He was also commissioned by the U.S. Post Office to make the first ever environmental 10 cent stamp, commemorating the 1974 World’s Fair in Spokane, Washington. In 1976, he worked with Lee Iacocca of Chrysler to save the Statue of Liberty, creating a series that generated enough funding to restore the desperately worn landmark.

His style changed during this 18 year retreat, adapting his technique to the paint rather than a graphic medium. His palette became softer and more diverse and his strokes became broader and more textured. Thematically, he began to develop new imagery, like The Dega Man, Zero Megalopolis, and The Umbrella Man. American icons, especially the Statue of Liberty, appeared over and over in his works and, by the time he returned to the public scene in the ‘80s, Max’s style has transformed into something dramatic and almost politically charged. He re-opened his studio, creating a 40,000 square foot space for administration, painting, production, and gallery tours, just across the street from Lincoln Center in Manhattan. From that point on, Peter Max has stayed in the public eye, using his art to express his creativity while raising awareness on environmental and humanitarian issues.

In his global causes, Max is a passionate environmentalist and defender of human and animal rights. He has done paintings and projects for Presidents Ford, Carter, Reagan, Bush, and Clinton. In 1994, Max created a “Peace Accord” painting for the White House to commemorate the historic signing.

Max has completed his fourth Grammy Award poster, redesigned NBC’s symbolic peacock, was appointed as the official artist for five Super Bowls, the World Cup USA, Woodstock, the U.S. Tennis Open, and the NHL all-star game. Recently, he created six poster images in response to the September 11th attacks. Proceeds from the sale of these works were donated to the September 11th, Twin Towers, and Survivors Relief Funds. In October 2002, Max created 356 portrait paintings of the firefighters who perished in the September 11th terrorist attacks. Each painting was presented to the surviving families of the firefighters at a ceremony at Madison Square Garden. Also in 2002, Harry N. Abrams, Inc. published a new hardcover book, “The Art of Peter Max,” written by Charles Riley III, Ph. D.

Today, Max has evolved from a visionary pop artist of the 1960s to a master of neo-expressionism. His vibrant and colorful works have become a lasting part of contemporary American culture. 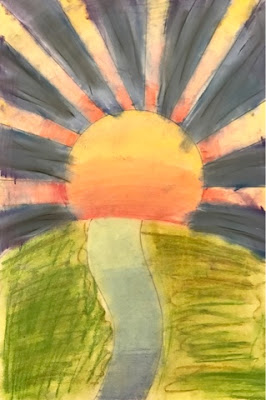 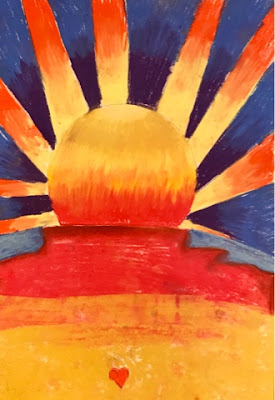 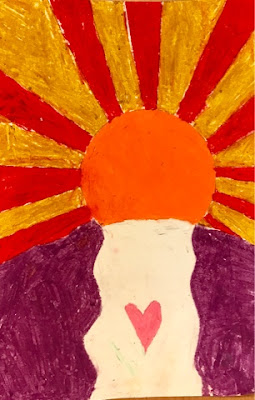 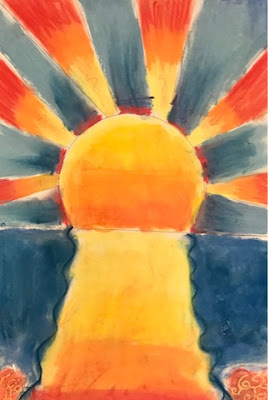 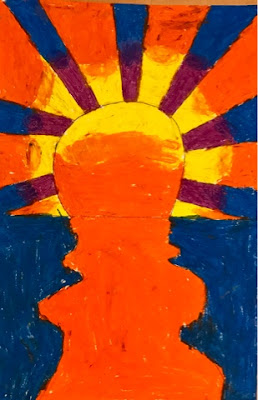 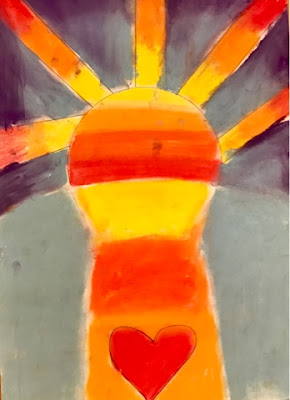 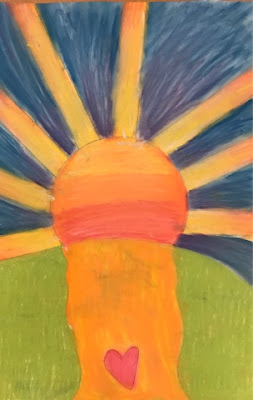 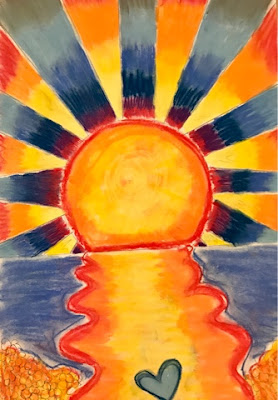 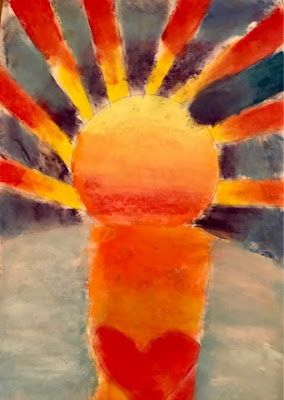 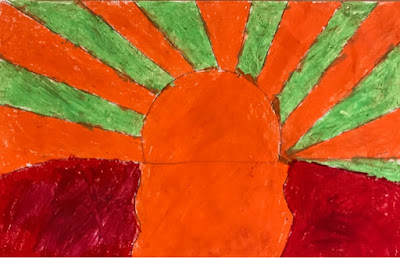 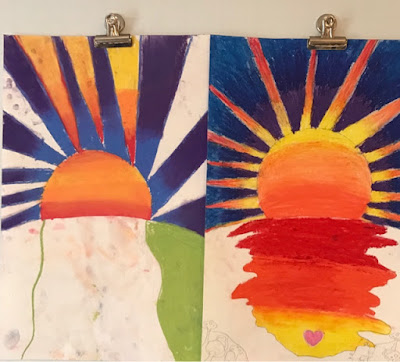 Mary Byrd is on a very creative hallway at Maclay. All of the teachers are really artsy and seem to just "get" projects that tie into their curriculum and our school environment. I always love walking down the hallway to check out their bulletin boards. Maybe they will allow me to post on the one that is going up now on Earth Day =)

So here is a SHOUT OUT to my artsy lower school teachers! I love that you allow your kiddos to get messy and learn about art in your classrooms within your curriculums! Thank you! And, to those of you dropping by to check out the blog...stay awhile! 1969 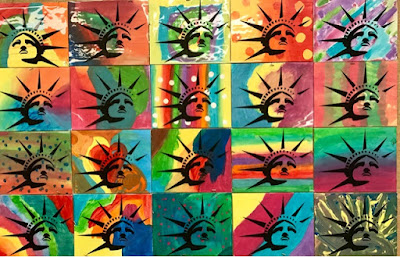