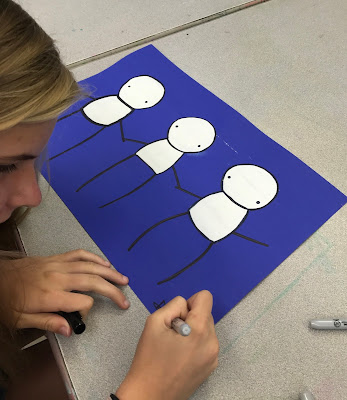 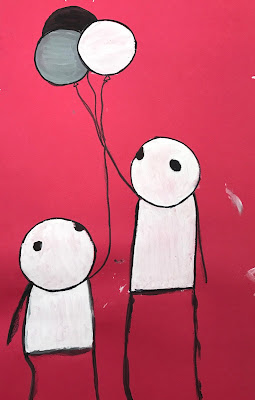 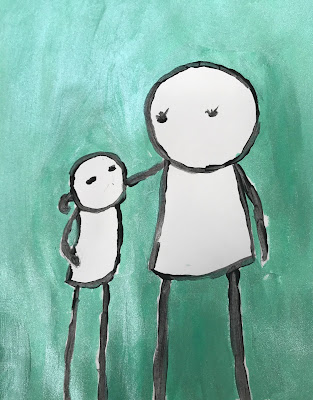 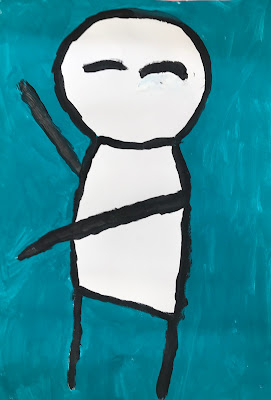 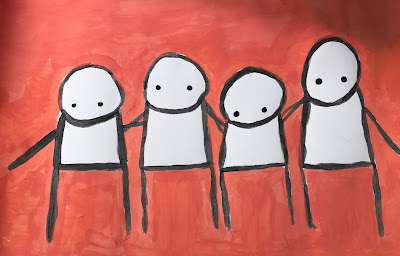 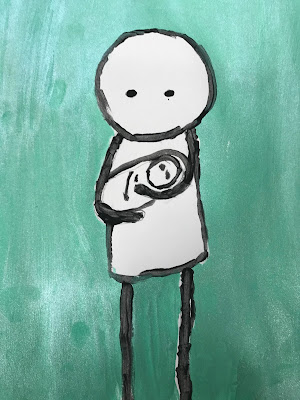 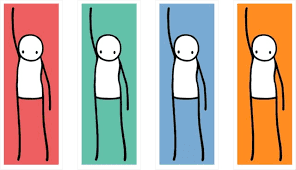 Stik started painting unofficial, socially conscious murals in his hometown of Hackney, East London in 2001. His simple stick figures wordlessly tell the story of his community and he frequently collaborates with hospitals, charities and homeless organizations. Working from his East London studio, these projects are largely self-funded and he now creates monumental artworks with communities across the world. 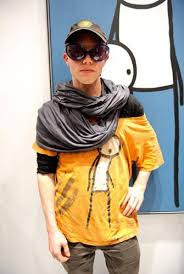 
PUT YOUR NAME ON BACK OF YOUR PAPER 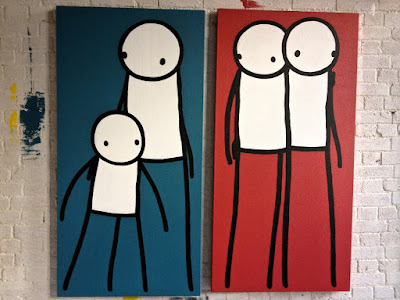 
“It’s the only thing in my life that I feel this strongly about.”


Stik makes for an odd figure in the world of street art. He creates cunningly simple lines and shapes that echo the nave drawings of children the world over. Yet the work is deceptively frank in appearance and meaning.

The artist’s painted community of stick men, women and children reside throughout London’s streetscape. Each location is carefully considered, and many are regularly revisited and maintained. These seemingly lost and forlorn figures could reflect Stik himself and his experience of homelessness. Perhaps it’s his way of making sure these characters have a home. He has stated, “My pieces are about moving through the cityscape and feeling insecure.” 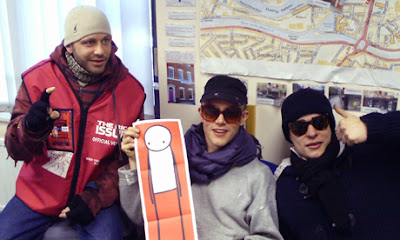 
What is known of Stik’s life would fill a very small piece of a very small wall. The English street artist was born in the mid-1980s. He claims to have always drawn, and that he found graffiti a natural evolution of his creativity. With no formal art education, he learned from other street artists, in particular Doze, Roa, Run and Zomby. Sightings of his signature stick figures in London began in 2002.

He maintains an anonymous persona, shielding his real self behind his image as a quiet and unassuming artist. There is, however, one biographical reference he emphasizes, and that is his period of homelessness. It’s a subject that his words often revisit, a theme that exists beneath the surface of his paintings.

Stik became homeless some time around the year 2000, the circumstances of which remain unexplained. He endured destitution for a period lasting approximately 10 years. He regularly relied on the generosity of friends for a place to stay, sofa-jumping day by day, but he also spent many nights in abandoned buildings. Stik lived through a lot of violence on the streets, and he recalls many times when he felt his life was in danger and he expected to die.


The winter of 2009 proved a turning point for Stik when a drop-in center helped him relocate to St. Mungo’s hostel in Hackney. His life at St. Mungo’s turned into a productive period for his street work. He acknowledges that the pursuit of art gave him the purpose and focus that pulled him of out homelessness.

Stik has kept a low profile as his recognition has increased, both for himself and his work (fans include Elton John, Bono and the Duke of Kent). He volunteers his time to art workshops and often gives back through donations of his work and time.


The artist originally used the name in reference to his drawn characters until people started to call him by it. After a while, the tag just seemed to “stick.” 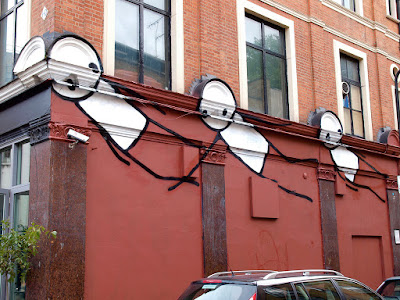 The art of street art


“Art is free unless you’re selling it.”


Stik’s approach to public spaces is careful and considered. His view is to fit in with the immediate architecture and location, and he’ll never bomb a street or community ” he professes no interest in owning a street. Part of his work ethic includes returning to every painting as often as he can in order to clean it up from dirt and tagging. On more than one occasion, he’s said that he spends more time cleaning graffiti from his graffiti than he does making graffiti.

Stik’s beliefs concerning the nature of graffiti and art reflect a traditional, romantic ideology of the street. “Artistic statements should be free from censorship,” he says. “Sometimes you have to justify a price tag, but you shouldn’t have to justify art itself.”

Stik hasn’t exactly termed contemporary advertising a plague, but he’s by no means a fan. It’s a multi-faceted issue for him, revolving around ideas of art and commercialism. He considers it a matter of rights, a matter of who owns the streets. Balled up in the midst of the debate, he thinks graffiti is essential to urban life. He has talked about graffiti being less about breaking laws and more about changing laws.

“Street art is really an important medium because it’s completely uncensored. It’s an environmental medium. Actually, you are using your environment. You are using the city as your medium. The street art scene is dialogue. It’s more than dialogue; it’s a whole forum for a discussion. And it has feedback. It’s the blueprint that social networking was based on ” writing on your wall.” 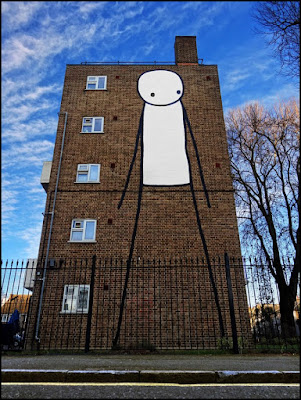 About those stick figures


“I’ve been drawing these characters forever.”


Stik quietly confronts his audience with the most unassuming imagery possible. The heads are round. The eyes are dots. Bodies are rectangles and simple lines become arms, hands and legs. An arc here, a lean there, a chosen curve of a line ” this is all he relies upon to convey emotion. “Body language is really like a direct language,” Stik observes. “Transitioning that to lines on a page or on a wall strikes directly to your heart.”

But they’re not merely stick figures. As Stik explains, his characters become a type of emotional shorthand to reflect how he feels. They’re silent and therefore have no mouths, and are meant only to observe. Part of Stik’s artistic principle is a conscious response to work that proclaims “look at me” ” he wants to create art that looks at back its audience.

Stik’s work appears at times so spare and bleak that its character and posture seems to convey a sense of questioning or longing, sometimes even despair. “A lot of my work is loaded with a kind of melancholy,” he admits, “but I do try to put a positive or a light bit of gravitas in it so people can actually relate to it and it feels like something human.”

Stik smiles whenever he talks about his graffiti pulling him out of his homeless nightmare. He’s obviously proud of his accomplishments, and at the same time humbled by the attention and his success. Nonetheless, one question commonly comes at him time and again: how long can you keep doing these characters? 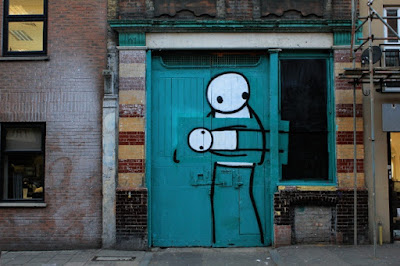 “I think,” Stik grins widely, “there’s enough diversity in stick figures to keep me happy for another 10 years.” 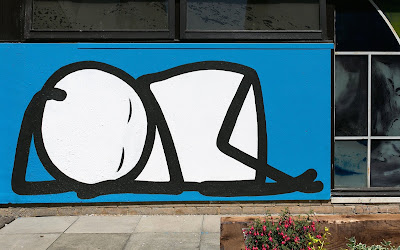