Tripod Textured Slab Mugs were the right way to go with my 7th Graders.  Usually, the kids work really hard and have poor results.  I am not sure if the project that I choose is too complicated or maybe they have not touched clay enough.  I have had 3 years of art with these kids and feel like they have made great progress.  If you judge by these mugs and know their background, you would probably say that they have come a long way.

So how did this project come to be?  I really wanted to use the slab roller with my 7th Graders.  I came across a video on Youtube by Karan Witham-Walsh.  She has a great Youtube channel Karan Witham-Walsh YouTube Channel.  Also, you can find Karan's work on Etsy at Karan's Etsy link.  I found Karan's video How to Make a Tripod Slab Cup.

The kids watched the How to Make a Tripod Slab Cup Video.
I rolled out the slabs.
I showed the entire video.
I gave the kids the slabs.
I showed clips of the video again and again as we worked.
The kids began the process of making the cup.
I gave them the option of using texture on their clay cups Texture Stencil Examples.  The stencil were very forgiving on some of the less than perfect craftsmanship.
Once they got the cup made, we wrapped in Saran Wrap and put the cups on the shelf.

We let the mugs sit for a week.
Then, I fired the mugs.
We glazed.
Some kids chose to drip glaze here and there. 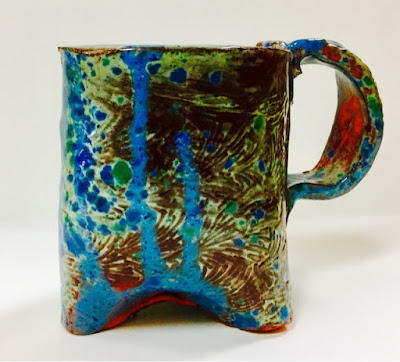 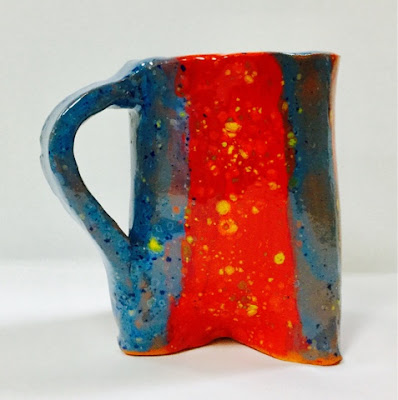 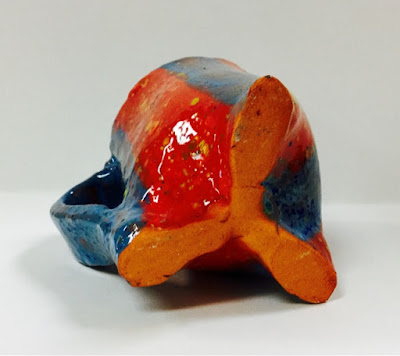 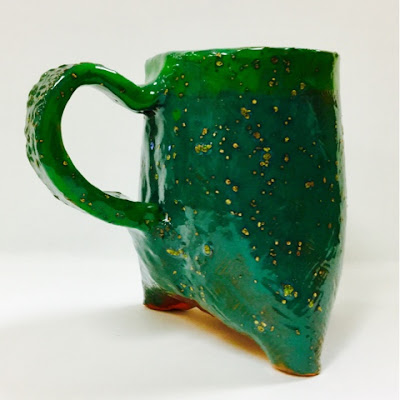 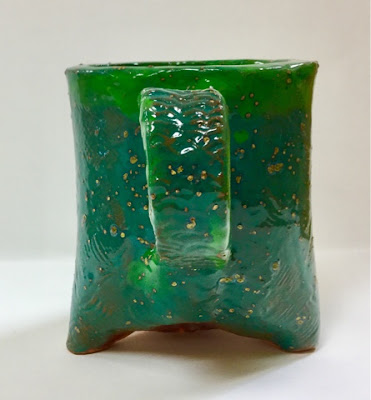 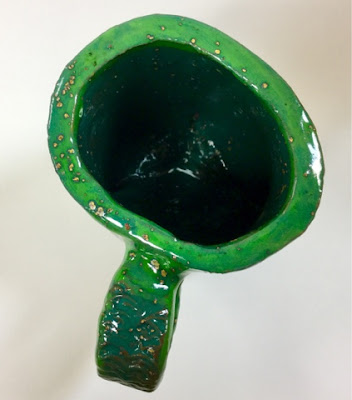 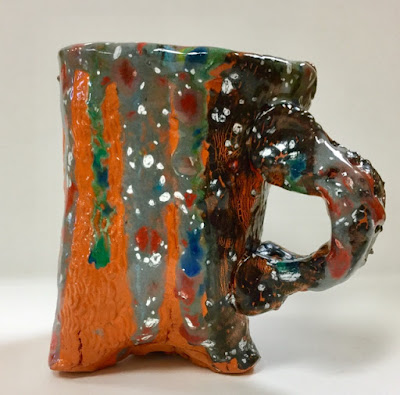 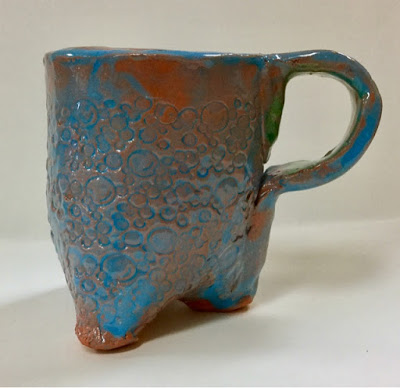 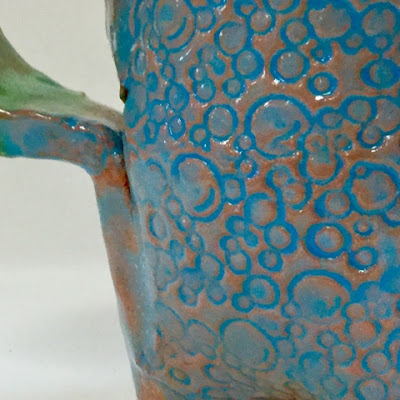 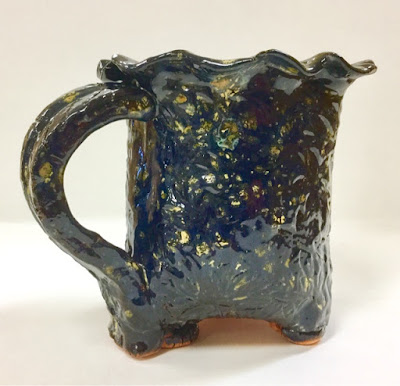 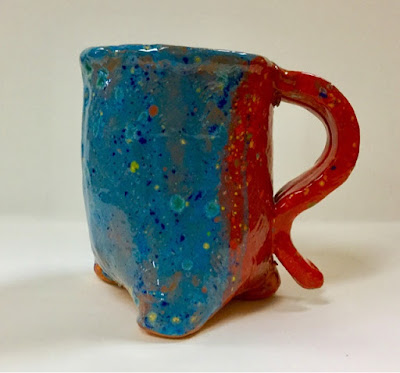 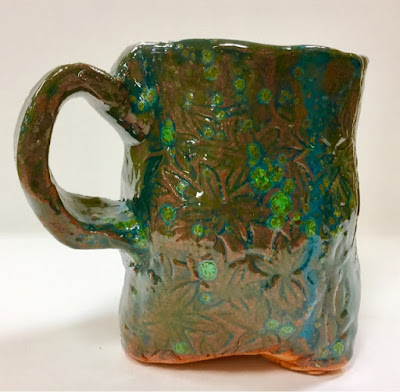 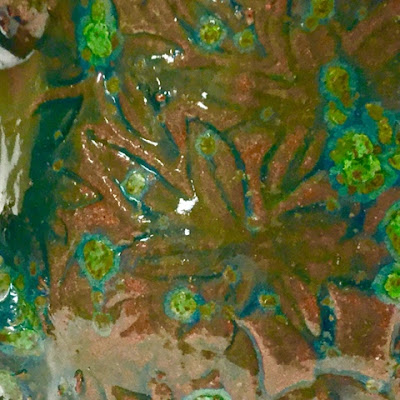 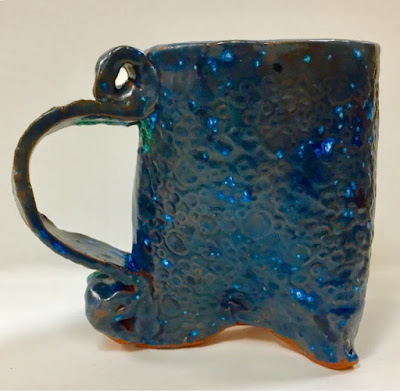 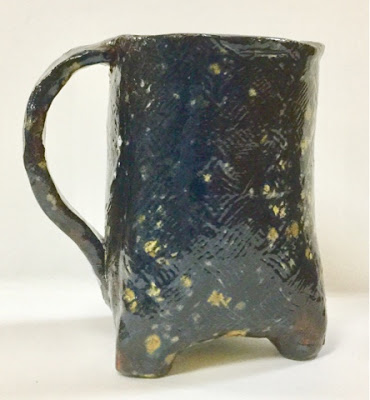 I like coffee.  I would definitely drink a cup of Joe from one of these mugs.  I was wondering where cup of Joe saying came from and googled to find these 3 possibilities.

Well, there are two popular theories about the origin of this phrase: One is in regards to Josephus Daniels, who was Secretary of the Navy. On the month of June, 1914, he banned all U.S. Navy ships from serving alcoholic beverages. The sailors weren't too thrilled with the decision, because they had to resort to the next strongest drink on the list, which was coffee!Since Josephus Daniels was the one responsible for banning alcohol and "forced" everyone to make the switch to coffee, the sailors nicknamed the drink after him, thus it became "a cup of joe," Joe being short for Josephus. That's the theory anyways.

However, a more plausible theory comes from Snopes, where it's explained how the word "joe" can simply mean the average man. For example, perhaps you've heard someone say: "I'm just an average joe." That means he's just an every day, ordinary kind of guy. Therefore, a drink involving the word "joe" would show that the drink is for the common man, or the average person. (http://www.knowyourphrase.com/phrase-meanings/Cup-Of-Joe.html)

There was a New York company named Martinson's Coffee (Andy Warhol liked to paint the cans) owned by a man named Joe Martinson. The neighbourhood of the company would be saturated by the aroma of roasting coffee, and coffee therefore became known as 'a cup of Joe'. (https://answers.yahoo.com/question/index?qid=20070224120839AAcoJtL)

What else but "Cotton Eye Joe" by REDNEX?