by karen #1965 3rd grade teacher this is a donut with a twist...a twist of wire...on one side of the donut, there is a portion of an american flag and JFK saying, "my fellow citizens of the world...ask not what america will do for you, but what together we can do for the freedom of man."  then it reads, "freedom is not free...remember the cross? John 3:16." 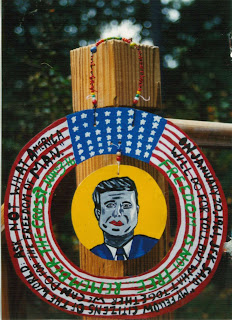 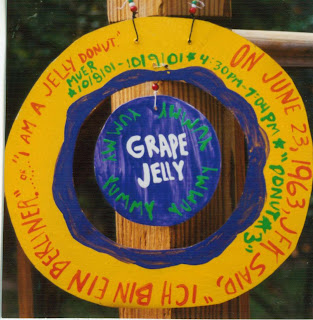 this project requires some metal snips by wiss, some tin that i got from some friends of mine that have an air conditioning company (their junk) and some acrylic paint.some wire and beads and a dowel and hammer to punch a hole.here is a picture of the steel snippers.you can get them at lowe's. 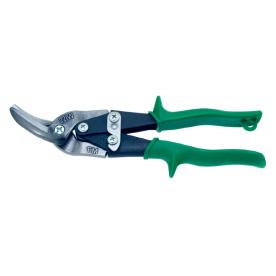 just like this donut painting, i have a fun side, but a serious side also...but i am an......american woman, stay away from me, american woman, mama let me be (lenny kravitz, 1999)....did you know that lenny kravitz is the son of helen willis that was on the 1970s sitcom, the jefferson's? i did...happy february 20, 2010!
p.s.i gave this painting to a democrat politician friend of mind...lol!
Posted by 2 Soul Sisters at 8:36 AM